Adding Different Looks To Your Inside Trap 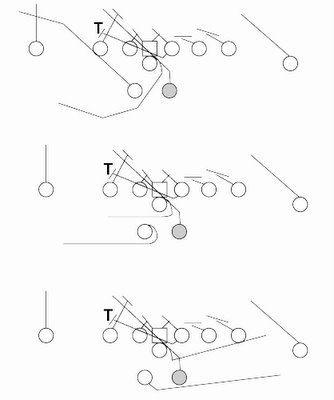 Most teams run the inside trap. Depending on what you want, you can add some differing looks to it by simply tagging the play call with some word to tell the remaining backs what to do. for instance, once school where I coached called the inside trap left "2 trap at 3." To have a bootleg fake, we would say, " 2 trap at 3 boot." To have a "spinner" option look, we could call it "2 trap at 3 spin." To carry out an option fake away from the trap, call "2 trap at 3, option away." I've seen some teams carry out an option fake towards the trap with the QB and HB faking option similar to the spinner except they turn around facing the LOS instead. That might be called "2 trap at 3 opton to," I suppose. In any case, you could easily add 2 or 3 more looks to your inside trap simply by adding an appropriate tag word that fits in with your team's terminology. Only 2 players need remember anything new and the other players need not worry with it.