I've made reference a couple of times on Veersite and a couple of other message boards about the trap-option we run. I've seen a similar play to this one in Wacker's Veer book. He called it the "Crazy" Option if I remember correctly. His play differed in that the pulling guard made his way past the DE and blocked second level. The DE was the option read. Wacker is correct (in his book) in the fact that you really don't need to have much of a fake to the dive back. The LBs tend to freeze leaving them open to the down blocks. Some time needs to be spent going over Logging a defensive player who squeezes the trap. The QB just goes on around the collision and gets up the veer lane ready to pitch if needed. The QB keeps most of the time, but when you do pitch, it tends to go for big yardage. 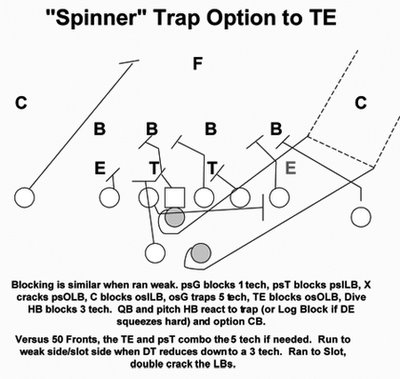 Cut One: Spinner to Twins


In Cut One, we run it to the Twins and end up trapping the psOLB (44 w/LBs bumped to the Twins). The DE pinched and tried to cross the face of the psOT who then blocked him. The MLB wasn't fooled and makes the play after a 5 yard gain.

In Cut Two, we are facing a 53 slightly bumped to the twins and run it to the TE side. There is not much puch on the psDT and the psDE does a good job wrong-arming the trap. Our senior guard does an equally good job at logging the squeeze DE and the play just bounces on around into the secondary. The psOLB is not sealed by the TE but ends up over-pursuing the QB. The QB does a nice job running in the broken field and makes a nice gain on the play.

You are not entirely correct about Jim Wacker and Don Morton's assignment for the pulling guard on the Crazy Option. The blocking at the second level occurs only in certain situations that might develop after the ball is snapped. See the following text from their book.

the quarterback reads the pulling guard

After the quarterback reverse pivots, he stays as close possible to the line of scrimmage and reads the block of the pulling guard. The guard will try to log or hook the defensive tackle. If he logs the tackle, the quarterback will be able to get to the defensive end for the option. You should tell him to get to the pitch if at possible. The pitch relationship is excellent because the back can get well out in front of the quarterback, and the slow-play ends and linebackers have a tough time catching the play from the inside.

Several things may occur to change the guard’s assignment The first situation is that the defensive tackle may penetrate and make a log block impossible. When this happens the gu4 will simply trap block him and the quarterback will cut up his block (Diagram 7-2). This is an easy read for the quarterback and he has a good chance to break clean right up to the free safety. The long runs generally occur if he “cuts the grain” and breaks behind the free safety.

Another possibility for the guard is that the defensive may slant inside. The tackle’s rule is to doo-dad the defensive tackle just like on a 4 call on the inside veer. This means that he hits the read tackle and then seals the linebacker, but if the tackle slants inside, he will lock on and block him down. The doo-dad block accomplishes several things. First, the initial on a read tackle stops his penetration and sets up an easy log block for the guard. The second advantage is that a slant tackle always be blocked by your tackle, allowing the guard to pull the block and seal the linebacker. Your quarterback will always get out to the end for the option and the possibility of a big play increases immensely (Diagram 7-3).

One temptation for the pulling guard against a slant tackle will be to block the defensive end, particularly if he is on a fire stunt. This will destroy the play because you want to option the end. If the guard blocks him, the linebacker is free and he will usually stop the play. The key against the fire end is for the quarterback to anticipate this stunt and pitch the ball right afl his reverse pivot. The pitch back should be wide open if the guard seals the linebacker.

You're correct, Wacker and Morton option the DE, if I remember correctly. I drew it up like we run it - with a trap/log block by the pulling guard and the QB pitch (rare for us) is downfield (CB is the pitch key in our playbook) I don't know why we block the DE instead of read him- that's the way it was set up when I got here. It works pretty well for us, though.

Thanks for the videos! These were great.

I believe your diagram is slightly incorrect. In the play as diagrammed, the QB spins in a Clockwise manner as the RHB begins an Option Pitch Route to the left. The defense reads "Counter Dive" or "Counter Option".

The QB, however, continues his spin through a full 450 degrees (360 + 90). the RHB stops and reverses his path and the Defense is threatened with a "Counter-Counter Option" to the opposite (Right, in this case) side.

I first saw this with Jerry Stovall's 1980 LSU team against Emory Bellard's "Wingbone".

Over the years, I've miss-labeled plays and butchered terminology with the best of them! I'm pretty sure I know the play you're speaking of and you're correct - this ain't it.

The play I've diagrammed is a play we ran when I was at Middlesboro High School... and that's exactly how we ran it. I immediately miss-labeled it "Trap-Option" and placed it up on Veersite. I saw that we were trapping the EMOL so I threw in the trap with the option.

The original trap option looks a hell of a lot more like some kind of hybrid Wing-T play than anything an option coach drew up. In fact, the first time the light bulb lit over my head and let me know that I was using the wrong name for this play was when I ran across the true trap option in some Wint-T playbook. I would draw it up, but all I remember was thinking "I don't like how that play looks." But it did clue me in to the fact I was probably not using the correct name for the play in this article. So I'm going to just refer to it as "Spinner" or "Spin Option" from now on... due to the pirouette action of the QB and pitch HB. In fact, the play I have drawn up is a lot closer to what the Flexbone boys call "Counter Option" - cept they log the EMOL and go outside and pitch off OLB. Since we can't cut outside the tackle box in Tennessee, we just wrap the pulling guard up on the LB and pitch off the EMOL. Personally, I like that as it almost always gives us a pitch and we get on the perimeter.

Honestly, I don't really know where Coach Roark got this play (Spinner Option) but I had used the Carson-Newman playbook for years before I ever managed to get a look at either an old NDSU veer playbook or even on older Houston playbook.