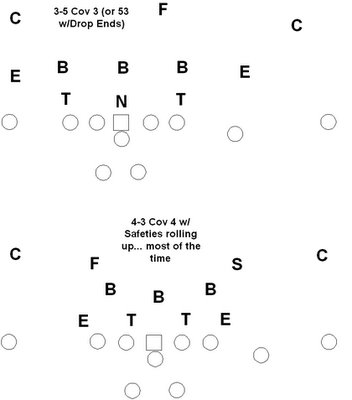 This post is something I've been wanting to do for a while now: Gameplan against defenses we see at the high school level. I've decided to start off with the 3-5-3 (or, if you're semi-middle-aged like me, the 53 Cov 3 with drop ends) I've seen a lot of coaches asking questions on the message boards on how to attack the 3-5-3. I've drawn it up against a 3 wideout splitback formation... but don't feel you have to stay with that formation alone. Also, the DTs are shading to 5 tech's when the DEs are dropped off... and they get in 4-Is when there's a TE liked up to thier side. The DE walks up and plays a "tough" technique on the TE - squeezing him down hard if he combos with the OT and staying on the LOS. The OLBs are mostly playing QB to Pitch, but they and the DEs are playing games whenever there is a TE lined up. I've got my own ideas on what might work best (hence the 3 wides), but feel free to get into 2 tights and run it down thier throats. BTW, the D line is pretty good, so good luck. Every so often, they also will jump into Cover 0 (man with no safety) and send the house.

My advice is to finesse this group as your O line is faster, but out-weighed around 30 lbs a man from tackle to tackle (if they weren't, what's to keep you from lining up in the Power I and running it down thier throats?!) Have fun.


The second defense is your standard 4-3. They are insisting on shading to the twins (DTs - 3 and a 5) and the DEs play a 5 if there's no TE and a 7 tech if there is a TE. The OLBs and DE's are playing games and the safeties are rolling up like a shot if near back dives about 75 percent of the time... but every so often the SS rolls up and they give you a cover 3 behind it... or the corners and safeties switch up who rolls up to take pitch. they don't play man - at least on the film you've seen. The front 7 is quick and athletic and the LBs all scrape fast and are very agressive.

I feel like the guy on the old Mission: Impossible TV show who records the taped message at the begining. Your "mission," should you choose to accept it, is to come up with the best game plan possible for each defense. Try to stick to around 5 running and 5 passing plays total since I'm one of those "purists" who will "run no play before it's time." (some of you may remember the old Earnest ans Julio Gallo Wine slogan - some of you won't)

Send your comments, scans, etc. to veersite@gmail.com. In the subject line, put "gameplan" so I'll know what it's about. And if you're one of the several coaches I've promised to send some video to, I'm working on it (although a nice email to remind me might be wise!)

Well, have fun with it and I'll tabulate and post the results as they come in. Please state if you do or do not want to be credited with your solution. If you don't specify, I'll assume you're cool with having your name posted. You've been warned!

Have a good one and Merry Christmas!

coach, we run a complete 50 package...slant...as well as double eagle..and stack(3-3-5)...and the thing that kills us is counter dives(backside A)and rubbs(diving one back in A, and gving to another back in B...we have more problems with these two plays..than any others...as a defensive coodinator, i'm glad that everyone wants to spread and toss the rock around...the more reecivers that you have in route, the less protection you have...the only thing that we need to rep is screens...however, true triple option is a b**** to stop...as coach boone said in remebering the titans...it's like novicane, jsut give it some time and it will work..........