Well, I hope everyone had a great Christmas and is preparing to enjoy New Year's eve as well. I am especially looking forward to The University of Tennessee vs. Texas A. & M. game Saturday at 11 a.m.

While I have been away for the better part of the month, I have been thinking about the next series of articles for Veersite dealing with X's and O's. I am conviced that the next topic at hand will be blocking rules/schemes for the playaction off the veer. I would also like to dabble in 2-back protections and 1-back protection with the other back free releasing into a pattern. So if any of you guys have any ideas- send them in! I am more than glad to give credit to the source of any info I get, and I would love to post complete articles from other coaches if I can get them. 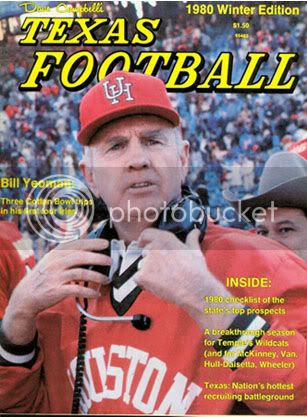 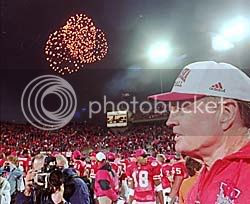 Everyone knows the "biggies..." the coaches who for one reason or the other are icons in the arena of option football. But who are some of the lesser-known coaches who have contributed offensively to this area of football? I know a few coaches in the smaller college ranks that have won or are winning using the option. I know there are many, many more than the few I have heard about. Please submit your recommendations for notable option coaches past and present and I will compile and post the results.

I have had some really great replies to this over on the Rolling Thunder Message Board. Here are some of them:

Pasqualoni and DeLeone at Syracuse. Even though there has been a change there. many agree that their knowledge of the option is incredible. Pasqualoni turned
Western Connecticut State from lowly backwater to NCAA playoff team in four years with the wishbone."

A coach From Michigan that many of you have probably never heard of, but is an extrodinary coach! He ran Triple Option out of split back early in his carrear and now mainly out of double Slot. His team this year was Ranked in the USA Today Top 25 and appeared on ESPN. He is also on of the winningest Coaches in MI, one time leading a team to 9 consective undefeated seasons. If you haven't heard of him yet, trust me, you will.

I would like to add Royal, Bellard, Bryant, Bud Wilkinson and Missouri's Don Farout. Without Don, would we have option football? Without Wilkinson and his Okie shutting down the Split-T, would we have the powerful split-back veer and mighty wishbone? Come to think of it, without the Okie would the No Fun League have an undefeated Miami team?

Rodgers never won the big championship but he did contribute greatly to wishbone option football with his book. I have read this book cover to cover and think it should be reprinted.


Coach Smith,
Many great coaches have been mentioned here. I'd like to add two more: Barry Switzer and Kenny Hatfield. FWIW: Both are Arkansas graduates.
Switzer convinced Chuck Fairbanks to abandon the Houston Veer while he was Fairbank's Off Coord at OU. "Veer was a good rushing offense, but you had to pass the ball.." "We need to be running UT's Wishbone." And the rest is history for Switzer and the Sooners!
Hatfield As many of you know, revived Air Force's program with the Wishbone, before turning it over to Fisher DeBerry. Hatfield went to Arkansas where he won alot of close games, Two SWC championships-and they couldn't stand him! Go figure! By the way, Hatfield ran the "I-Bone" at Ark. He's done a good job at Rice with the Triple option, also; including a stunning 1995 upset of UT in the driving rain in Houston.Sorry for writing a novel!
Respectfully,
Larry C.
PS: let's not forget Paul Johnson!"

Holtz started running the Veer at William and Mary and continued at NC State and Arkansas. Ran 'I' option (and a little "bone" at Minnesota and ND. Wrote two books on the Veer - "The Grass is Greener" while at NC State and "The Offensive Side of Lou Holtz" while at Arkansas. His 31-6 whipping of Oklahoma in the 1978 Orange Bowl running the Veer, after suspending four starters, is still a classic. And of course he won a national championship with Tony Rice running the option and Tim Brown catching the ball (and occasionally a pitch as HB in bone) and returning kicks."


From the Megaclinic Option forum...

Wouldn't Coach Larry Beckish have to qualify?
How about ...well, forgot his name. Coached at Wofford and Appalachian state during the 70's.... Brakefield. Really started the flexbone that Hatfield gets credit for. DeBerry was on his staff at each stop before he went to Air Force.
How about the Moore guy who was at Kansas during the mid-70's and used the read belly/double dive.
Pepper Rogers.
Charley Taffe.
Emory Bellard.
DeMeo.
Pasquloni/Deleone (Syracuse)
Paul Johnson
Stowers
Greg B"

Farley---University of Wisconsin at River Falls"

im glad someone mentioned johnson at navy. i also think mike sewak at georgia southern is a good one. also, i must mention a little know coach, ivan jasper. he is the qb coach at navy and does an outstanding job teaching the triple."
Posted by Steve at Friday, December 31, 2004 4 comments:

151: The Greatest Streak on ESPN Thurs 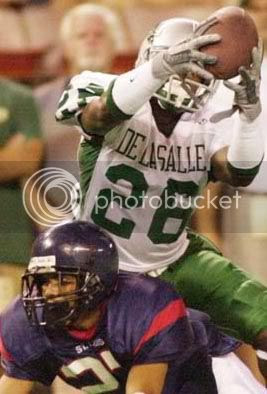 Option from the Wing T

Over the past month or so, I have had the opportunity to discuss running the option from a true Wing -T formation and from splitbacks with a TE and wing combo. While I don't own the video, I did notice on www.coacheschoice.com the following item: 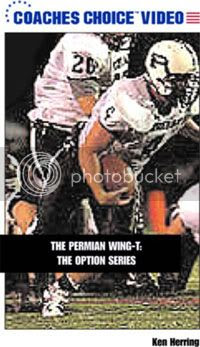 Two things caught my attention concerning this: first, it mentiond wing T and Option together, and second, it mentioned Permian, TX.

If anyone has seen this video and would like to evaluate it, please feel free to do so.

Coach Ed Cook was kind enough to email me some comments concerning the Permian video...

"Coach I couldnt post on your site, but maybe you can throw this on
there...The Permian wing-t video is a waste I took nothing away from
the video...I know the coach used to coach there but he is at
Kingsford or something close to that during the filming...the game
cut-ups are very poor and out of order...complete waste of money..."

So it sounds like the video unfortunately might be pretty aweful. Too bad - I had hoped this would be a good 'un. Thanks again to Coach Cook for giving his opinion.

I ran across an article recently concerning running option from the Wing-T set and wanted to make mention of it. The article is written by a coach who is running outside veer from a Wing-T set. It has nice play diagrams and is well written. If you're into this sort of thing, it is definitely worth the time to read.

11Apr05 : Video Cuts
Here are the game cuts from the 1998 State Champs. I am emphasing the plays which were ran either from a wing set or can be found in any Wing-T playbook.

Cut One and Two: OSV to the Wing

First, we always stay in our splitback alignment. We never go to a FB and a HB like a true Wing-T team might choose. The main reason is not to mess with our mesh points. Another might be that you can't get quite as good an angle on the OSV with a true FB as you can with splitbacks. You guys that only see 4-fronts might not care so much about this, but to those of us that see a lot of 5-2 and 5-3 defenses and run a lot of OSV, it's important.

Personnel: After viewing the '98 video and our 2004 cuts where we ran with a wing set, I've come to the conclusion that for the most part, you should sub a true running back in for the wing player. While a reciever can arc to second level on OSV and not cause any problems, he might not have enought meat on his bones to down-block a defensive end on the sweep.

OSV to the Wing, Cut One:

OSV to the Wing, Cut Two:

One of the things many Wing-T teams are guilty of are being Tight End oriented in play selection. They stay in a 100 or 900 set and run sweeps strong and the gut strong and only hit the weak side with the crossblock or the waggle. Sometimes they will motion the wing across and toss weak to the FB. Teams I've coached for have been pretty successful loading up the strong side, making sure you get guys in the hip pocket of the guards, put a big guy in a 6 and keep the TE off the ILBs and bring the OLb hard off the butt of the wing. I usually had OLBs key the HB and react accordingly. Flat motion across the formation always brought an outside blitz into the motion... the DB's played a loose-man coverage so we could get a man running with the TE on the waggle... you know the plays that can hurt ya from the T!

Anyway, the ISV weak is a GREAT way to take advantage of guys like me who load up the strong side and dare you to run weak. the last man on the line is the dive read and the OLB will be your pitch... split end stalks and the FS is assumed to have rotated over to the TE/Wing side.

Power Sweep to the Wing.

Think about what the strong side defensive end has seen so far- Option, option, and more option. He's probably not as worried about getting down-blocked by the WB as he might have been initially. I still say that you should put a thicker kid in at the WB if you plan on running the Sweep. It might be a HB, of a FB, or maybe even the other TE. In 2 of the 3 Sweep Cuts, you'll see theWB has a hard time handling the DE (unfortunately you won't see the circus-catch he makes later in the game).

The last series of clips deals with another play you'll find in any Wing-T playbook, the Gut (or inside) Trap. You don't have to have a true FB lined up straight behind the QB in order to run it, of course. We keep our splitback alignment whether we break the formation or not. We can still run our options from sets, but like many other coaches have discovered, you can run off OLBs or get them to shift by breaking the formation. Or not . ..whatever works the best.

Well, that wraps up tonight's post. So while we are without a doubt a Veer team, Coach Roark has effectively borrowed from the Wing T to enhance and supplement our option attack. Of course, any time you are in a three-back set, you have great possibilities for misdirection. Without giving away any family secrets, there's a great potential for using the WB for that misdirection... so use your imaginiation and remember that the sky's the limit!

Have you ever seen those motivational posters that feature some awesome event featuring some lone individual overcoming impossible odds? Of course you have. But here are several you may NOT have seen. These posters, available at Despair.com are slightly different. Okay... they are very different. but if you have a slightly different sense of humor like me, a couple of these up on the wall behind you will give your office guests that perfect blend of indignation and outright confusion you've been after so long but until now have yet to achieve! 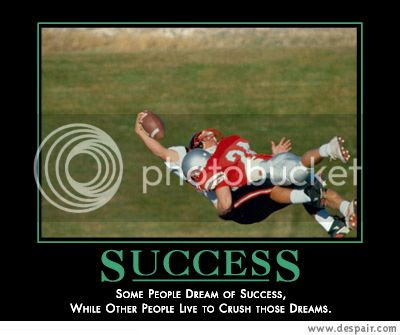 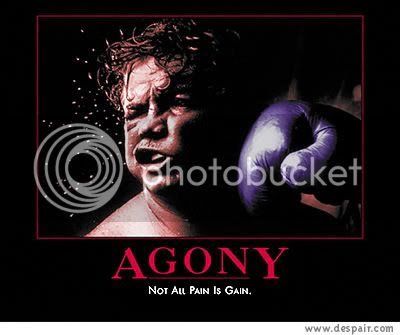 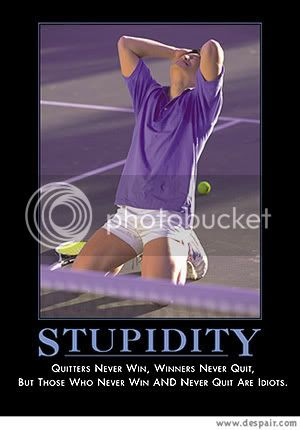 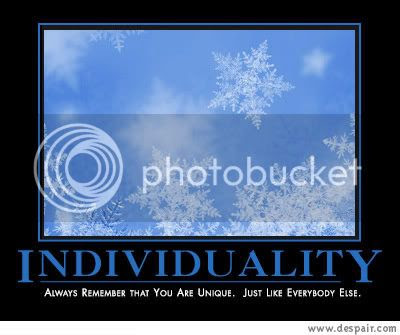 Posted by Steve at Wednesday, December 08, 2004 No comments: