The Mother of All Trap Option Posts

I think I'm likin' me some 'whirleybird' Trap and Trap Option. All that spinning around makes it hard to find the football. Combine this with the reverse-out by the QB on Belly and Belly-O and you might have a viable alternative while your QB's get solid on midline and ISV.

Note: Post updated on 12/10/07
Along with Inside Veer, Outside Veer, and many other option plays, the Trap (or Freeze) Option will be heard mentioned as well in hushed tones in darked doorways and back alleys across America.

Run the football?? Coach, are you crazy??

Almost every team runs some kind of inside trap. If you run the Wing-T, then you of course run it. So if you do happen to have the inside FB trap in your playbook, then you essentially have almost 50% of the Trap Option in already!

Most option teams have a call that lets the QB know that he's going to give the ball to the dive back - no matter what. Blocking this "called dive" is as varied as there are ways for football coaches to hide a receding hairline from the fans in the stands.

Some will base block it and others will still veer block it, but one thing is certain: the dive back is the one who is going to get the football. One bad thing about base blocking your dive might be the fact that you might be running the option precisely because you aren't a very good base blocking team! Of course, if you veer block it and the dive read pinches and takes the dive... well, that's no good, either. No, we need a way to use quick linemen and angle blocking to our advantage while still going with a predetermined give.

This is sounding more and more like we need to be looking at the blocking scheme for the inside Trap.

Lets start with the backfield footwork. I'm not going to set this up with any particular offensive set. Stay with whatever backfield set you already use- you don't really have to change things around unless you just want to. If you have a set with a true fullback, like the "I" or Flex, or Wishbone then you are fine. And there are many teams running Midline very effectively from splitbacks.

So if you can already run Midline, then you have the backfield action needed for running the Trap Option series. If you have been afraid to install the Midline, here's a nice way to move in that direction without initially having your QB learn to make a dive read.

If you already have the Midline installed, then many of your existing coaching points will probably work pretty well with the Trap.


Note: Some may ask, "Why run both?" Well, I look at the Trap Option series as a way to get some option out of a QB that just hasn't "gotten it together" with the option. This might be a good series for a sophomore backup QB to run if he's suddenly thrown into a big game ("Just hand the ball off, Kid - it's the Trap! And stop looking like you've seen a ghost and swallowed your tongue!") You might also use it for a wide receiver that's your second-string QB and just doesn't get enough quality reps on Midline and Inside Veer. Survive the game with him running Trap/Trap Option... Then you've got the next week to get him more up to speed. - SS


The QB will clear the midline of the Center stepping back and gaining depth away from the LOS. Coach DeLeone, however, extoles the virtues of the long ride on both the Trap and Trap Option.

This is the point where I deviated somewhat from traditional thinking regarding the FB depth, type of mesh, etc. I had four days to install some semblance of the Navy offense this spring at my ill-fated non-job, and I wanted to make it as simple as possible. I like the point mesh and will not have one mesh for ISV and another mesh for Midline and Trap.


First, I decided that the point mesh was my mesh. I have my reasons and you are free to agree or disagree. What I needed to do was find out if it would work with the Veer, the Midline, and the Trap.

I based the FB depth from the 4 - yard HB depth that we had used at Middlesboro. Hey, go with what you know, right? However, I had the FB's adjust their depth a little depending on which play we were running.

On ISV, I had him think "I want my heels just an inch or two in front of the 4-yard mark." (Oh, and I put his aiming point as the crack of the psGuard instead of the outside foot. More on this in a later post.) On Midline I had him think, "I want my my toes right in the paint marking 4 yards." And on Trap/Trap Option, he was to think, "I want my toes a couple of inches behind the paint." In a nutshell - Midline = 4 yards, ISV = cheat up, and Trap = cheat back.

I honestly don't think it was enough for the defense to pick up on as I watched for any signs of recognition among the defensive players and coaches - and saw none.


Now to the mesh.

Somebody once said that consistency is "the hobgoblin of little minds." Well, consistency in your mesh (whatever type you choose) equates to improved ball security. Feel free to quote me - it will make me feel better.

Anyway, pointing the ball directly at the read isn't that difficult on ISV - whether or not you're in Split Backs or the "I" or the Flex. Now, the QB's first step isn't as far as it it is when running ISV from Splitbacks, but it's still up into the LOS and the ball still gets seated then extended.
Like I mentioned above, I cheated my FB in the Flex so it would hit as quickly as it would is Split Backs... not leaving the QB standing there poking the ball and whistling while waiting on the dive back to finally get there. It looked good and I was satisfied when our gives on ISV left defensive players "breaking their necks" as they realized the ball had been handed... and that they were definitely heading in the wrong direction.

Gotta love it when the dive breaks!

Now, how did the point mesh work when applied to Midline and Trap Option? The short answer is: it worked . But you're not entirely running the point mesh, either. Confused? Read on.

When you try running the Midline and Trap with the point mesh, don't go nuts because the ball isn't pointing directly at the defensive Tackle. Take a second to think about the QB's footwork and what's going on with the positioning of the football.

The QB must dropstep - clearing the midline of the Center, and gather. This leaves him oriented parallel to the LOS - not pointing into it like he would be running ISV. The ball still gets seated then extended... and the ball is still right out there directly in front of him like it would be if he were running ISV. It's his orientation with respect to the LOS that's different - and that's okay. His footwork has changed, but not how he seats the ball nor what he does with it afterward.

That doesn't mean that you're not going to have some challenges, however.

The QB might start tryiing to reach the ball back to the FB since he can now see him out of the corner of his eye (due to his being parallel and not into the LOS.) My only coaching point concerning this was for the QB on Midline and Trap/Trap Option was to concentrate on pointing the ball at the "tip of the read's nose" - instead of his center of mass like we do on ISV.
This seemed to work.

You "ride and decide" aficionados will be happy to here that I actually think a short ride is okay on the Trap Option. Of course, I tried to limit the ride to just the back hip of the QB to the front hip of the QB at it's greatest. So maybe there's hope for me in your eyes yet, lol! I've noticed that the "back hip to front hip" ride many times is the extent of the ride used by several of Navy's QBs, so I guess that's cool.

As far as the line play, just stick with your rules for inside trap. Some teams won't try and trap an "A-gapper" while others just say to hell with it - trap the first man past the center. It's probably best to be consistent to your existing rules and go with it. 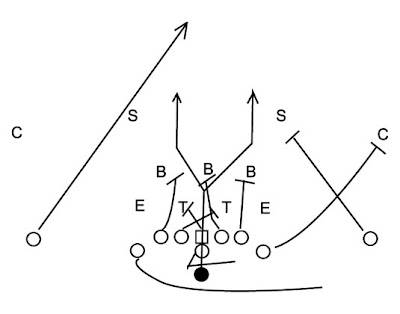 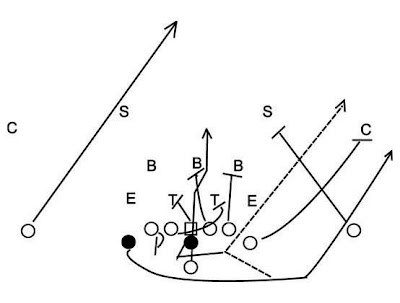 Note that the blocking rules of the Trap/Trap-Option are pretty close to those of the Midline Triple. Both plays have the "Seal N' Wheel" block of the bsTackle... and the front side blocking is pretty similar. The Trap/Log block of the bsGuardis the main difference... other than that, it's pretty close. I believe this is why we were able to put in the Trap Option series in short order and be fairly successful with it - we had repped the heck out of Midline in the Spring And Fall.

Well, that's about it on Trap Option. Below are some diagrams showing how easy it is to make two plays look like a whole bunch. I've not even got into running it from Trips or from other offset formations. 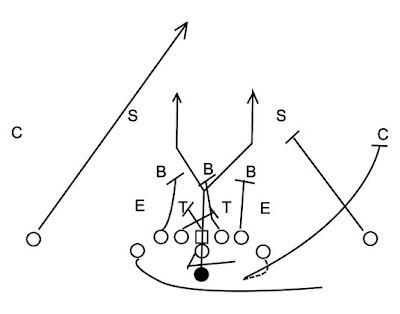 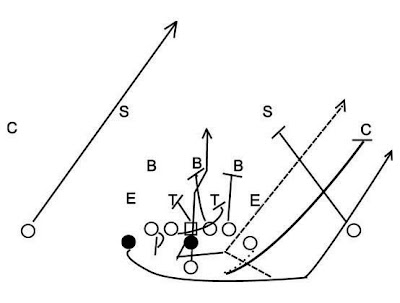 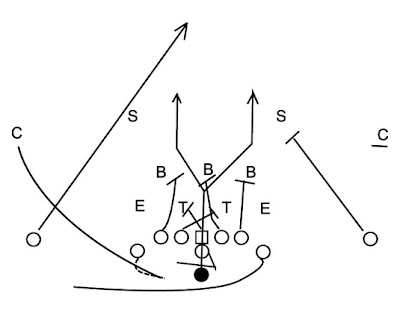 I'll probably have a short video of to go along with this post by the end of the week.

Coach Smith
ps. It feels good to be back on veersite.
Posted by Steve at Saturday, July 11, 2009 3 comments:

The Birddog: Futility of Defending the Option.

There is an awesome post over at the Birddog (Navy football blog.)

Very detailed info on why the flexbone works...