In Support of the Base Dive

We had our first Spring team practice Tuesday (half-pads; lot's of new kids... lot's of coaching) and it went pretty well. Our line (veterans) are already using smartsplits, calling even or odd frints, etc. Our green backfield, however, is still very much a "work in progress." We are going with our 2nd string QB from last season at left WB (and backup QB,) a new transfer at FB, and a SE converted to WB. The group is rounded out with our promising Sophomore at QB. I am currently casting him as the new villian in the next Batman movie, the Fumbler, after he ran off a string of 5 fumbled snaps in a row during our inside drill. It looks to be a combination of a new Center/QB combination, a Center doing a better job getting off the LOS, and too little bottom hand pressure by Tuffy.

Heh... the Fumbler. Tuffy hates that, but I'm having a lot of fun with it. I bet I don't have to shoo him onto the practice field early today to get snaps and footwork reps with the centers, hardy-har.

Anyway, while working thru the inside drill, something really cool happened. We had called ISV right and when we got up to the LOS, we had a 3 tech sitting in the gap. For whatever reason, our right Guard didn't call for a double on the three. The psTackle, not getting a call to double team, shrugged and widened his 5 tech out with a nice 5 ft. split. With a 2i on our bsGuard and our bsTackle taking his man out 5 ft., there were definitely some running lanes out there. Our "D's" answer to our Flexbone is a 44 look behind the 5-2i-3-5 front, so running ISV to the 3 is definitely a lot harder to combo than versus a 43. Personally, I was thinking we would have to learn to recognize that we would have to run a ISV Lead scheme (double option) to the 3 tech and stay with the triple to a 1/2i... but that's just me.

What happened next changed that.

Our psG drove the pi$$ out of the 3 tech, our C was up and on the bs ILB like a flash, our bsG scramble-reached the 2i and the QB left the ball for the FB... who proceeded to cut straight up psA Gap and right by the FS who was thinking the QB still had the ball. 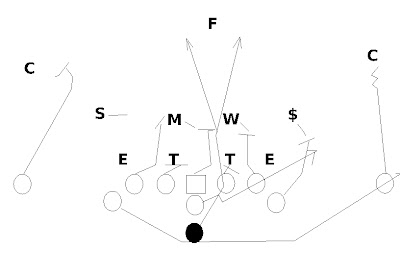 I guess the Base Dive is going to have a place in our scheme this year.

Coach Smith
Posted by Steve at Thursday, April 30, 2009 No comments: