Night of the Living Walmart

Well, my first post in a while and its not even related to football... Unless you count the fact that I'm a football coach and it happened to your's truly. Works for me! 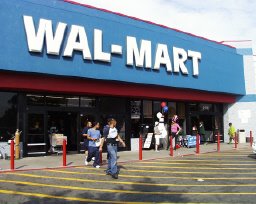 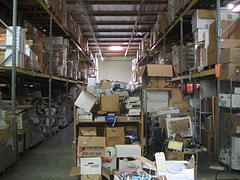 "Watch for falling prices." A very successful slogan for Walmart back in the day. I found out Friday night, unfortunately, that falling prices aren't the only things you have keep from landing on you. 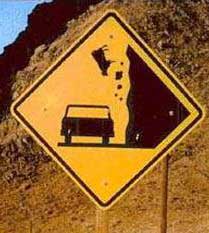 It started simple enough... while my Pathfinder is in the shop having it's 170K-mile transmi$ion rebuilt, Coach Bennett was nice enough to offer me his pickup truck to go to the store. (p.s. I just gave you a clue to my present whereabouts... sorta like "Where's Waldo!") Anyway, it seemed inoccent enough, but little did I know what was, literally, "in store" for me.

I should have noticed the signs... 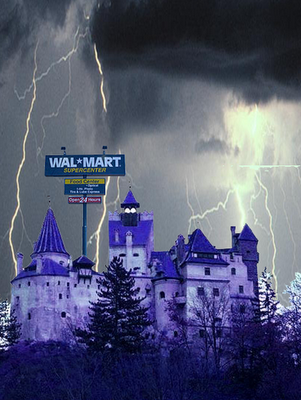 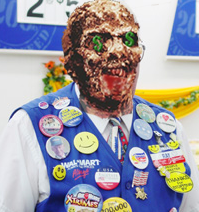 Welcome to Walmart. May I eat your brain?

It was late, though, so I missed a few subtle hints that perhaps tonight wasn't going to be my night.


After loading-up on Skillet Select Dinners, I made my way to the pet section. I have four dogs, and the oldest is getting up there in years. I decided it would be nice if I got her and the three other dogs each a big, soft dog bed pillow to sleep on. 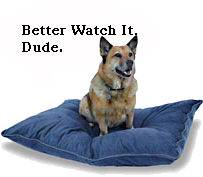 Remember when you were a kid and you loosened the lid on the restaraunt salt shaker so it would spill it's entire contents onto the plate of the next poor slob to pick it up? 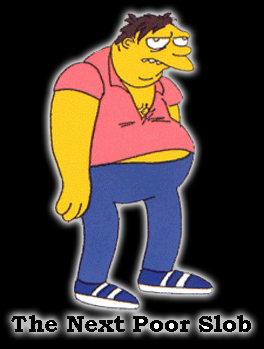 Hey, I'm the Next Poor Slob!

Well, I used to be that kid. If I had a nickle for every time I left one like that, I would be a rich man. Well, tonight, it was my turn. This is the part where I met the recieving-end of the ol' Karma-Boomarang. 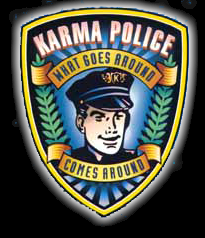 Warning signs - they're all around us... telling us to look out for this... watch out for that. All you have to do is pay attention and you see them everywhere. 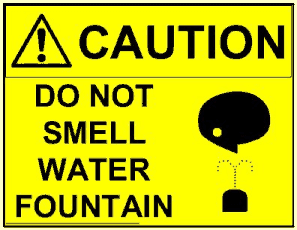 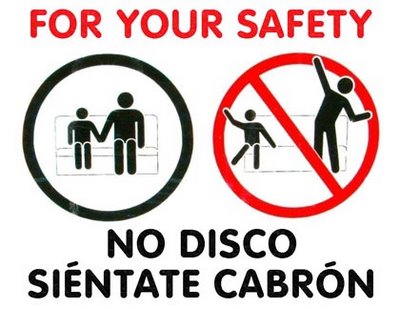 I look way up on the top shelf and see the dog pillows perched precariously on the edge. In plain sight and visible for all to see is the following: "Please get assistance with items on the top shelf." Of course, I'm the kind of take-charge guy who waits for no mere "associate" and takes matters into his own hands... So I pull down pillow one... pillow two and three... and then pillow four. But number four is the same color as pillow one and I think to myself that each dog should have a different color pillow in order to remember where they sleep. Now I know full-well that dogs would be considered color-blind with respect to humans and the different colors on these pillows are more for the owner's sake than for anything else. But I was being "me" that night... and it was a quarter 'til one A.M. So I reach up and give it a pull.


The ironic part is now I have no idea what which of the four pillows was number four; I've completely forgotten what color was so appealing. As the pillow clears the shelf I see something getting dragged down with it out of the corner of my eye. 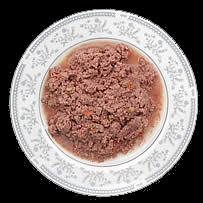 I usually get my dogs dry food. I save the canned stuff for treats and other occations. However, tonight I was "getting" a certain special can of dogfood whether i wanted it or not. I didn't know exactly what was tumbling down off the top shelf right at my head, but I did know it was coming apart or something as it fell. It is a small comfort looking back that at least I still have reflexes good enough to avoid an open can of rancid dog food falling at my head at one in the morning in a strange Walmart in North Florida (clue #2, waldo fans). I had little time to congradulate myself however as it fairly exploded upon impact - showering my shoes and lower legs with a hearty blend of rotten meat, black fluid, and maggots. Mmmmmm, Mmmmm! That's good eatin', Folks! 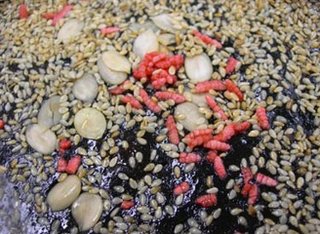 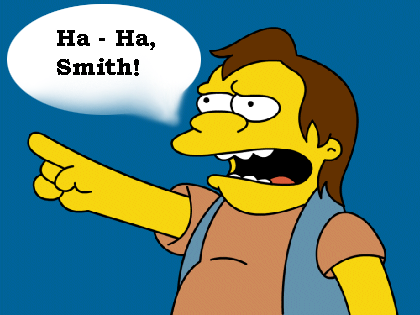 The worst part is it got on the dog pillow and I had to settle with another color. Dammit, now I'm pissed! Ah yes, how could I have been so foolish - it was a variation on the old salt shaker ploy. Except they had upped the ante by wrapping an open can of dog food in a pet pillow! Yep, the first thing they teach you in the Cub Scouts - always check your pillow for rancid dog food! I would have smacked my forehead like the V-8 commercial except I was trying to figure out what in the heck I was smelling. It was bad, that much was immediately apparent. It will be hard to describe, but I'll give it a shot. Let's see... Imagine your 10 closest friends. Now imagine them defecating into a 5 gallon bucket one after the other. Now carefully sit that bucket in the hatchback of a black Trans Am on the 4th of July. Make sure you leave the windows rolled up, Sports Fans! Now take out the bucket in a couple of days, stick your head over it, and breathe in. Do all that and you will begin to get a picture of what "Isle 12" smelled like... and not just Isle 12... Ol' Steve (at least the lower third of me) now smelled like that, too!

I'll skip through the rest of the evening, but I can attest that my "shopping experience" made the term "sub-par" look like getting an A+ on the GRE. The best was check out. I don't know which i liked more, the dude that came up behind me while i was unloading my buggy or the reaction of the check out girl. Dude started out acting all put-out cause he was having to wait (you've had to tolerate this cat too, I'm sure) Imagine my glee when he almost threw-up on himself when he invaded my "personal space" in a vain attempt to make me hurry. Sorry, Dude, the Stevemeister doesn't rush! To add insult to injury I loudly and proudly proclaimed, "Hey, I think I just sh*t myself... How 'bout that!?" 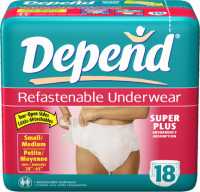 Super Plus - an extra gallon of holding capacity!

He suddenly decided another check out isle was the place to be.

I kinda felt sorry for the poor check out girl struggling to scan my items with one hand while holding her nose and mouth with the other. That little scan window can be pretty honery, especially when you're in a hurry it seems. I explained to her what had happened, but after the "soiling myself" comment I made to Dude, I wonder if she believed me? 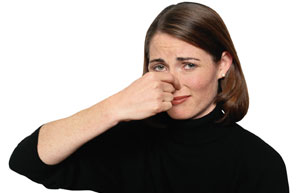 Probably not.
The ride home was a windy one, what with the windows down and all. I was almost used to the stench by the time I pulled in the driveway as I was able to put up all my groceries before hitting the shower. I fell into a fitful sleep filled with images of pet pillows, rotten meat coming at my head, literally being buried under an "avalanch of values", and then Rosie O'Donald shows up in in a G-string.

What a flippin' nightmare!

Consider this advice, Sports Fans - and a warning - always check your shelving for booby-trapped exploding meat cans before giving something a yank. The wardrobe you save just might be your own!

ps. Week one of Spring practice is in... more to come as I experience installing the Veer from scratch for the first time!
Posted by Steve at Sunday, May 07, 2006 1 comment: