For the second straight week we have out-gained our opponent and yet have managed to find ways to "snatch defeat from the jaws of victory." Last week special teams turnovers helped us to a one point loss, and this week 4 turnovers and a no-show defensively led to a 40-30 stink-fest. If we busted alignments and assignments once, we did it 5 to 10 times. Several led to big plays and/or touchdowns. That's a sign of lack of discipline mentally. At least that can be corrected. The other problem isn't so easy.

We were flat and showed a lack of heart in general.

400 yards of offense and we still manage to lose the game. No wrapping up, arm tackles everywhere, standing and watching on both sides of the ball, a lack of hustle... The list goes on.

I'm thinking we night need a new decal for our helmets if we are going to stand a chance this Friday: 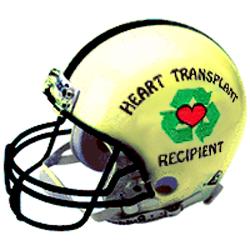 In fact, starting Monday, we're going to be having a major team-wide heart transplant-o-thon... 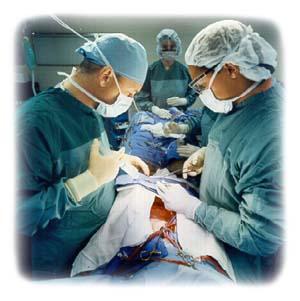 ... or I know some athletes that might need to start thinking about having a nice, long J.V. season for the rest of the year.

Much to our shock and horror, Coach Gilbert and I discovered this week we had been plastered over the pages of our local paper. Actually, after reviewing these photos, the only conclusion I can come up with is...

'Nuff said. Click below for the hi-rez versions of these action shots!

Coach Gilbert puts the boot to it!

Note the perfect stiff-arm and tongue action as these players are "posterized" ala Jordan!

Unfortunately, towards the end of practice, things took a turn for the worse. Thank goodness for us both, these additional potentially embarrasing photos didn't make it into the paper along with the others. A word to the wise: It's always a good idea to have excellent relations with the local sports reporters!

You can't see it from this angle, but I still had the tongue-action going... but not much else.

Lucky for me Life-Flight was nearby.

Funny... I don't remember posing for this.

I ran across a post on Rolling Thunder's Option Board tonight about a coach needing help with some free digital editing software he had received. Never one to look a gift-horse in the mouth, I proceeded over to Proscout Video to check things out for myself. Much to my suprise, they seem to indeed be giving away copies of their software (which looks very capable from the product info and screen shots). It looks like they received a grant from NFLHS.org to provide somewhere around 2000 high school football teams with their product.

The software, similar to what college and professional coaches have been using for years, will help coaches index game film. Coaching and instructional tools, such as tendency reporting, statistics, and a video telestrator with text overlay, interact with the game film. The result is an expedited and more effective use of game tape at the click of a button.

"The benefits of good coaching last a lifetime," said USA Football Chairman JACK KEMP. "This donation by the NFL will provide an on-going benefit to high school coaching staffs around the country, and more than 150,000 players."

Every high school football team across the country is eligible to participate in this program. The first 2,000 to respond will receive the Proscout Video easy-to-use software package. To learn more, contact Proscout Video at www.proscoutvideo.com or call 877-766-7268.

Here's the link to Proscout's home page... Look for the menu link to register. I don't know about you guys, but I've wanted to get my hands on something like this for quite some time.


This play is a variation of the midline veer play, and just like Coach Dieterich's out scheme, it is a way to take the "fall" player out of the play. Typically, when running midline from a split back formation, we are forced to block defenders one on one with poor angles.

For some teams this might not be a problem, but when you are outsized by most of your opponents, this is unsatisfactory. As you can see from the figure above, the pitch back is a wasted player. The odds that the ball is going to get out to him on the pitch are not good. Therefore, to give ourselves an extra blocker and eliminate the wasted player, we switch roles.

Now the backside halfback is going to recieve the dive, and the frontside halfback will kick out the outside linebacker. The quarterbacks footwork will change slightly for this play. He will step with width and depth at seven or five o'clock. The quarterback also has to get his shoulders parallel to the path of the runner. From there, the quarterback carries out the normal midline ride and read. If the quarterback does not give the ball he will slide into the B gap and make a cut off the block of the frontside halfback.
Another thing that we will do to get better angles and a double team is run a horn block with the PST and TE, with the PST going first and the TE coming down on the inside linebacker.

Position responsibilities
Quarterback- step to 7 or 5, get shoulders parallel to the path of the dive player, preform the dive read, slide into the B gap and get vertical.
Backside Halfback- Step inside foot first directly at the centers butt, no dancing allowed.
Frontside Halfback- Step with outside foot first, and kick out the outside linebacker.
Tight End - Horn block with the PST, seal the inside linbacker to the inside.
PST - Kick out the playside defensive end.
PSG - Inside release to the inside linebacker

...You can determine the rest of the assignments using the play diagrams provided.


Thanks again, Coach Mallory, for sharing with us with a fresh new take on the Midline from splitbacks!

ps. (you'll no doubt notice that some of the position responsibilities "disappeared" when I opened or saved the document... "DOH!" I have no idea what happened, but I'm going to blame MS Word on this one... )

Midline. To the option coach, it just may be the "Last of the Mohicans." In fact, the Midline is about the last option play a coach can "get away with" running from under center these days... Without being referred to as a "Dinosaur," that is. Why, the very mention of the word gives Flexbone coaches an almost visible shudder of joy. And while it's not as "sexy" as running outside veer from the shotgun, (I wonder how many times the words "Urban Meyer" were mentioned in job interviews this past spring??) it is certainly can still get the job done with respect to moving the football.

I decided to go on a quest to find the best possible way to run the midline from splitbacks this past off-season. After a film trade a while back, I had noticed that a team down in Georgia, Thomas Co. Central, ran the midline and brought the backside halfback thru to lead for the quarterback. Later, at the Carson-Newman football clinic this past year, I heard Coach Turner (O.C.) mention that the Yellow Jackets staff had convinced him to stop "wasting" the backside HB and bring him thru on the midline like they do. At that point I knew I had to get some more film with this scheme on it.

I posted on several message boards that I was looking to trade film for midline from splitbacks (or something to that effect) and before I knew it I was in contact with Coach Jeff Schlieff from Spring Lake Park High School in Minnesota. Coach Schlieff mentioned he ran the midline and brought his HB thru for the QB keep, and soon I was watching his highlight tape and some midline cuts he had made for me as well. It was exactly what I needed to see, and I can't thank Coach Schlieff enough for taking the time and effort to help us run the midline to it's maximum potential. He is not only a great option coach, but also one of those all-around good guys you meet every so often in this line of work. I wish him and his staff the best of luck for this upcoming season.

Below are several game cuts of Coach Schlieff's SLP Panthers running the midline. You will see what we call a "K" block with the psTE and psOT as well as some base blocking to the split end side as well. After watching this, you may note that the QB keep, with that HB leading him up the field, is almost an isolation play in itself. I hope you enjoy and learn from these clips and perhaps it will help you as well in fine-tuning your midline option.

Coach Smith
Posted by Steve at Tuesday, August 02, 2005 No comments: