Here's a short post detailing a little reverse option Coach Roark has been known to run from time to time. Actually, it's blocked the same as our version of the Spin or "Crazy" option with the exception of the wingback carrying out the duties of the quarterback.

I'll let the diagram speak for itself... 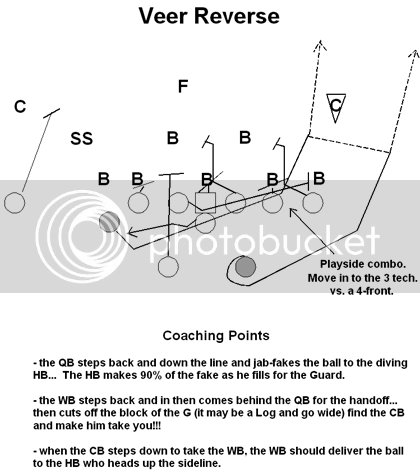 If you are a team where the QB reverses-out a lot, I think this play will work as well. The QB just has to remember to get back off the line and out of the way of the pulling guard. (this can be tougher than it sounds if if you use the point-and -read C-N method that we use.) The combination blocks on the noseguard and psDT aren't for show - if you can get movement on those guys, there's a much greater chance of the play hitting quick and getting some yardage.

Cut Two: Veer Reverse
Looking back, we could have done a better job preparing the wingback... he's not really trying to get the CB to take him and thus giving us the pitch - and the sideline. The WB was a great young man and a hard-nosed football player. But it's easy to forget that the WB doesn't get the reps running the option that the QB gets. Verbalizing reinforces the coach - not the player!

Coach Tony DeMeo is an option coach that I consider to be an innovator in the modern option game. I first heard about him when I bought a book of his, Football’'s Explosive Multibone Attack, at the suggestion of a coach I met at football camp one summer. It was a good book, but I was at a school that ran no option and it soon became a forgotten memory filed away somewhere in my pea-brain. Anyway, the next time I ran across his name was when I first joined the staff at Middlesboro. Several of the coaches had travelled to Washburn University to talk to him about his style of spread option offense. While there, they bought his complete flexbone option offense video tape package. I later found these tapes buried in a locker in our football office. Eager to learn all I could about the option in as short a time as possible, I began watching the tapes. I was struck by two things simultaneously: one, Don't ever let Coach DeMeo get his hands on a deck of cards, and two: He's a really good teacher concerning the game of football. His material is easy to follow. His teaching mottos are also great ways to get your kids to remember their assignments. While we are split back team, Coach DeMeo's flexbone material is easily adaptable to our particular needs. It would also be a good primer on the option offense in general, and I would recommend his option videos without reservation.

You can learn more about Coach DeMeo here from an article at American Football Monthly. 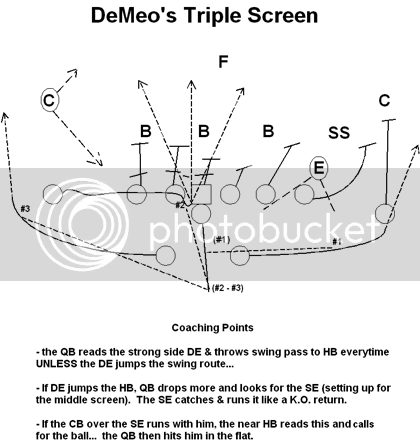 The Triple Screen sounds complicated at first and might look somewhat intimidating. If you think about it as a swing pass to the FB with a middle screen thrown in for good measure, you have a more accurate description of the play - at least to me. The fact that the HB check the weak side CB to make a ball call is the 3rd element of the "triple" screen. That's it.

I'll go back over the coaching points in the diagram.

In a nutshell, the QB reads the DE as the FB flares out and throws to him if the DE rushes or squats. He will only move to his #2 if the DE jumps the swing route of the FB.

The middle screen portion is just as you would expect. The line should momentarily stop the charge of the defensive linemen before going to second level... The Split End takes a big step downfield then comes back down the LOS - getting behind the D line and looking for the ball from the QB. The HB is also running a swing route and he is eyeballing the CB over the SE. If the CB jumps the screen, he immediately calls "Ball" and the QB should hit him in the flat.

That's it. It sounds complicated, but as his video shows, all it takes is a good practice routine filled with plenty of reps.

I'm posting a link to my original Triple Screen notes (in Adobe PDF format) here. This also shows how he runs it from the flexbone formation using some wingback motion.
Posted by Steve at Wednesday, May 04, 2005 2 comments: