Chalk it up, mark it in your calendars – this is the day when Coach Steve Smith said, “no, I don’t think you need to run the Triple Option, guys.”

What’s this world coming to?

Okay, here come the caveats, men.  By all means, drop everything and start running the Triple - if you manage to hire a couple of coaches who have experience installing and running it.  But if you’re an old Wing-T coach, or Spread Gun Coach who hasn’t had a QB under center for years, and you don’t magically have a few new hires who are God’s Gift to installing the option, then you might want to calm down and consider a less radical approach.

All things considered, unless you’re just blessed with all things happening at just the right time, such as the planets aligning or such, then you might want to put the Triple on hold for a while and start off by putting your toe in the water – not holding your nose and jumping in off the deep end.  In your current offense, you may already have the makings of a nice called-dive and double option package.  So let’s take a look at some of the possibilities and see if this makes any sense.  If you do and if it does, then you may find out that running “an” option (or two) can be almost as good as running “the” option.

Basis – I’m not sure of the exact origin of the Belly Series, but it looks like something a Wing-T coach cooked-up somewhere along the line.  (It wouldn’t surprise me if those guys at Delaware didn’t dream it up.) The whole notion of the Belly Dive appeals to me due to the old quote attributed to Lou Holtz.  “Easy to Read, Hard to Block  -- Hard to Block, Easy to Read.”  Stemming and slanting teams can make an option coach’s life hell if he doesn’t have an answer ready to dial in.  But if you consider that quote and what it says, then you can begin to see why a simple play like the Belly Dive can be a great supplementary play for an option team.  The defense is trying to blow-up your QB’s reads – but in doing so it can provide easy angle and fan blocks for the linemen… while the LB’s and DB’s still have to play their assignments and can’t just run to the ball.  So even when you’re not actually running the Triple Option, the threat of it can assist you nonetheless.

But I’m going to go out on a limb and say that the Belly Dive and Belly Option can be the meat of the offense – and not just the potatoes.  I’ve seen huge gains made on simple dive plays made by option teams facing defenses hell-bent on stopping the option.  The same goes for the Rocket Toss – when you get a 5 and 9 tech pinching so hard that they are helpless against a simple pitch to a wingback motioning to the perimeter.  But why were they pinching so hard to start with – to get heat on the QB.. trying to give him hot 1st and 2nd reads in succession so he will make a bad read. As for a counter play, either the Counter Trey or the Sally complement the backfield action of the Belly Dive and Belly Option well.

But the Belly Series isn’t the only one available for those seeking to ease into running the option.  Attacking right up the gut is the Freeze Option Series – which like the Belly Option – eliminates the QB’s dive read and takes the pressure off making a correct read right after the snap.  Like the Belly Option, the QB has some time before making a pitch or keep read- and doesn’t have to worry about defenses forcing him to make two correct reads quickly.  Between the two series, I like the Freeze a little more. By using some different backfield motions and actions, both the called FB dive and the perimeter Double Option can be used as counter plays as well.  If you’ve seen Navy’s or GSU’s Counter Option, then you’ve seen pretty much seen the Counter Freeze Option.

Hey, any time I can teach two plays to my linemen yet make the defense think we’re running as many as six different ones (using sets and motions), I’m going to do it.

Okay, now you’ve heard my reasoning.  In the next installment, we’ll look at some diagrams and see how the Belly and Freeze Series can help you get some option into the mix.

If you’re a coach who is thinking of installing the option for next season, you may want to read the following.

First, let me say that I think that without a doubt, the one offensive system that gives most teams an edge over their opponents year in and year out is the option.  If you ask defensive coordinators any time any where what the most difficult offense is to defend, nine out of ten will reply, “the option.”  The main reasons seem to be the difficulty in preparing for it…  forcing the defense to play assignment football… forcing the defense into fewer and simpler coverages – making them susceptible to the play action pass.   The reasons are many…  yet few coaches opt to run the option - even as teams like Georgia Tech, Georgia Southern, Navy, Army, and Air Force rack up the wins running various flavors of it. I found myself asking why this is the case and came up with the following:

1.  It’s not the Spread Gun, The Wing T, or the Power I.  As coaches, we know what we know and not many head coaches are familiar with the system.  Many guys just don’t know enough about the offense to stick their necks out for it.

2.  It’s hard to teach.  This is a deceptive statement, as I strongly feel that once a good coach is familiar with the offense and the drills and skills necessary to become proficient, the option is no harder to teach than the Spread Gun or the Wing T systems.  But until you are proficient, there is a danger of “getting in over your head” with the offense… and there are many misconceptions and pitfalls that can trip-up a rookie option staff.

3.  Coaches don’t want to sell-out to the option.  No other system is predicated on making the defense stop one play as is the option offense.  Almost all the supplementary plays take advantage of the defense “robbing Peter to pay Paul” in order to stop your base play – be it the Inside Veer, the Midline, or even the Outside Veer.  You have to commit to learning – and running- your base play over and over and over again until it is ran to perfection – each player knowing what do do and every adjustment needed to counter defensive tactics used to stop it.  But many coaches insist on hedging their bets – spending hours of practice time getting in the Gun, or Power I, or whatever they turn to when things just aren’t going their way.

4.  Knowledge.  With the advent of several option groups springing up on the Net (and even sites like this one) finding our specifics on running the option has never been as easy as it is today.  That said, like any offense, there is much detail and expert knowledge that goes with coaching it well- and there simply is no substitute for experience.  Since the option isn’t ran half as much as any of the other popular systems of today, finding coaches that have spent time coaching the option can be a challenge.  A line coach that has spend half a career coaching zone blocking and pass setting is facing a huge paradigm shift when switching to the option.  Size and heft take a backseat to quickness off the ball and knowing who to block.  An OC that’s used to running the Tony Franklin system is no doubt mystified when he sees an option QB has thrown for over 1,000 yards in a season – mostly using simple two -and sometimes single- receiver routes.  And what’s keeping them from being eaten alive by the blitz – look at how small that O-line is! Heh…  I’ve heard all that… and more.  Those of us that have run the option know the reasons why, but to a novice option OC, all this can seem like a mystery.

5.  It takes athletes.  Many coaches like to use the excuse, “well, I just don’t have the kind of hosses it takes to run the option.”  While it’s true that great athletes can make almost any coach look like a genius (well, almost any), No other offense has the potential of spreading the ball around like the option.  The fact that the option coach can truthfully claim not to know who’s going to get the ball each time he calls the bread and butter play is the single best argument I can make.  And if great athletes are all it takes to win, how can Navy and the other service academies manage to play with so many teams where their players couldn’t even get a scholarship?

So having given you 5 good(?) reasons NOT to make the Triple Option the linchpin of your offense, you’re probably wondering when I’m going to start telling you to drop everything you know and start running it.  And that would be the funny part. 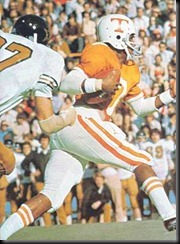 Great article on Holloway…  who always left it on the field.

Posted by Steve at Wednesday, February 16, 2011 No comments: