Well, the title sums it up. There's been a lot going on with me on a personal level the past month preparing to move cross-country to a new job in a new state. I'm not going to name the school where I'll be coaching because we'd kinda like to keep moving to the ol' split back veer a secret as long as possible. I will say it's a southern state. But that's it. I'll update after week one 'cause I am one fired-up individual and I think great things are in store for this upcoming season!

The Carson-Newman Clinic was awesome! I ran into several old friends and made several new ones... I'd especially like the coaches I met from Central Florida to shoot me an email (coach.steve.smith@gmail.com) since I've slept and forgotten exactly where they were from and have no way to contract them from my end - but they were an extremely nice group of guys. Bill Curry was an absolutely outstanding speaker and I am so very, very pleased to know that Coach David Cutcliffe (who also spoke at the clinic) will be running the offense this season for my Vols. As usual, Coach Turner was "the man" during the breakout session and Coach Sparks deserves cudos for coordinating yet another wonderful clinic. I'll type up my clinic notes in a few weeks but for now I'm finishing up my last week at M.H.S. this week and preparing to move sometime around the 13th of April. So there may not be many updates until I manage to get internet (and phone) service up and running. Wish me luck!

Well, in the spirit of April 1st, I have to pay homage to one of the all-time greats in the coaching profession, Jules Winnfield. You may remember that he had vowed to his friend Vincent to "walk the Earth" the last time we saw him. Little did we know that the man, no, the legend would find his way to coach youth hockey. I can only hope that he one day sees fit to turn his formidble talents to the gridiron. I would say that Coach Winnfield would put an end in a hurry to what Coach Wyatt calls "McFootball."

Click on the pic. Clip will open in your Media Player.


" And you will know my name is the Lord when I lay my vengence upon thee..."
- Coach Jules


Continuing with this post's ice hockey theme, here's a link to Coach Reggie Dunlop's magnificent half time speech . (do they call it half time in hockey??) Anyway, it is truly a study in motivational psychology!

Beware, however of some brief R-rated language, some not-so-brief violence, and of course, the wonderful hockey-stick-to-the-heads-of-all-the-opposing-players-in-the-box move! Not since Moe, Larry, and Curly have such moves been seen on the big screen... I tell ya, it's movie magic all rolled up into a few minutes, folks!

All kidding aside, there is some rough language in this clip including the F-Bomb... you may not want to play it if you have children present in the room, parents.

You have been warned!
Now click on this picture if you are an adult and prepare to laught your butt off. 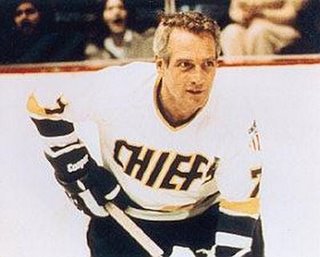