This post will be online Saturday night.
(Awe hell, it took til late Sunday... refunds for everyone! And it's late, so typos be damned!)


Below are the two diagrams I posted initially concerning this post. 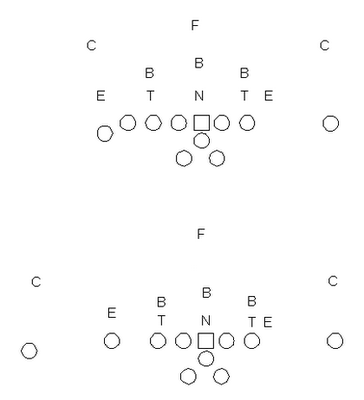 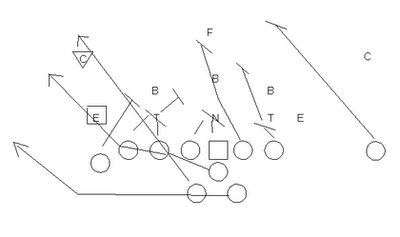 Well, it's been a roller-coaster ride and we're not even to the half-way point in the season. Our very good second string QB transferred during the summer, so of course our starting QB separated his shoulder in the Kickoff Classic game. Did I mention our starting right guard was also out with a high ankle sprain?

Needless to say, it's been tough. Making the switch to O-Line from RBs/QBs was a challenge, but when we were running the veer, it was okay. I felt I could do a pretty good job with the run blocking techniques as it is low, hard, and down in the legs. But when we switched to the "I" and the power game due to necessity, I have really felt as if I was no longer the right man for the job.

Not a great way to start off the season.

Coach Bennett has a saying, "It's time to bow-up," and it's a good one. This past week vs. Madison, with our option QB back (much quicker than anticipated), we switched back to the veer and gashed them in the second half. The backs and line had the best game of the short season versus what is argueably the best defense they have faced yet. After an 80 or 90 yard drive, it all came down to an inside veer... 4th and goal on the three yard line with about 6 minutes left to play - down by six points. We had them on the ropes and out of gas. The play was there... but we didn't get in.

I'm not going to dwell on what happened because it isn't worth the effort. What went wrong can be fixed, and we have a heck of a foundation with which to build the second half of the season.

It's gonna be quite a ride.