Several years ago I decided to use Google Video to store the clips I use on Veersite. My thought process was simple - Google is one of the "800 pound gorillas" of the Internet, right? My videos will be there for as long as Google was around... probably a long, long time.
Wrong.
Google bought Youtube and before you know it they won't accept new video uploads to Google Video. However, Google infused a lot of cash and upgrades to Youtube, reducing it's Suck Quotient and making it a more attractive host for video content. At least for me.
Well, according to Google, all video content hosted on it's old Google Video servers will cease to be available on April 29. That's a few weeks from today.
I will do my best to fix the clips so that they remain available without interruption on Veersite.
However, I have no timetable on when this will happen except that it will be in the next 3 weeks.
So if you click on a video link in the next few weeks and it doesn't work - don't worry. In a matter of a few weeks the situation should be resolved.
Coach Smith
Note: As I feared, the web filter at work blocks access to Google Video and I have no other access to high-speed internet for another 2 weeks. This may take a while.
Posted by Steve at Tuesday, April 19, 2011 1 comment:

Spring is almost here and that means… 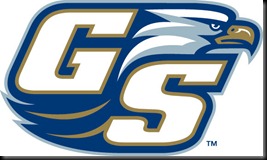 Georgia Southern is having their annual Coach’s Clinic April 1st and 2nd on the beautiful GSU campus in Statesboro, GA. 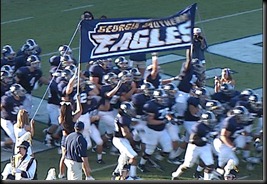 Coming off a great 10 – 5 playoff season, Coach Monken and his staff proved that the triple option is truly the heart and soul of GSU football – and you’ll not find a better venue to improve as a spread option coach.

At the GSU Coach’s Clinic you’ll find a staff that’s taken a program in trouble, installed the option, and in a single season and blasted GSU back as a frontrunner in the Southern Conference. The GSU coaching staff will have plenty of sage advice to help your program implement the explosive GSU option offense and stingy GSU defense!

Nuff Said. Clear out your schedule for the first week of April and prepare to learn from men who have “been there, done that, and bought the tee shirt.”