Here's the 43 with 1 and a 3 technique defensive tackles and 5 tech DEs mentioned a few posts ago. The DEs are taking dive, the OLBs are scraping hard for QB, and the Safeties are flying up for pitch.

I sat down and came up with a few ideas concerning what might work veresus this alignment and player responsibilities. 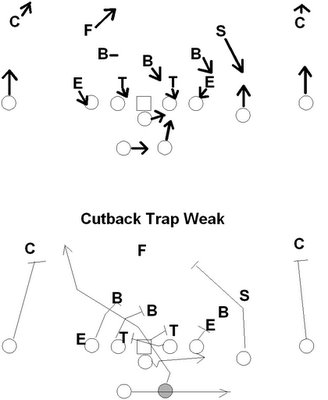 Against a 52 or a 43 with the rolling cover 4, the cutback-fold or cutback trap can be a good gainer if the halfback can break into the second level. The safety opposite backfield flow is usually concerned about getting back to that deep third (as he should be) and isn't hanging around for misdirection. Now for the next two plays. If you find that the ps DE is squeezing down and getting the HB, you are primed to run some boot action his way. I have this play diagrammed here. 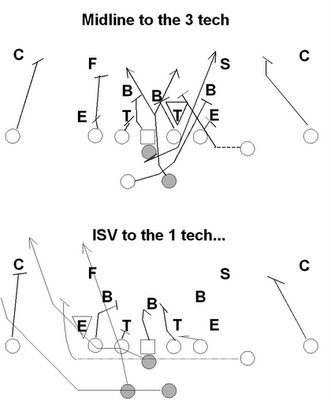 The Midline ran to the 3 tech and the ISV ran to the 1 tech is standard fare for option teams everywhere. There are two problems with the 3 wide alignment I've chosen, however. For the Midline, you really would like to have a TE coming off the psT block of the DE to seal on ILB. You can adjust to this with some motion by the "Y." (Just be sure to use this motion in other situations to avoid giving the defense a coveted 100% key) The second problem is the balanced defensive alignment. You really want to run strong in this situation to take advantage of the numbers. But if you do, you have that problematic 3 tech that can be a challege to block one-on-one with the psG and unleash the MLB if the psT can't come of the doubleteam fast enough to cut him off. My solution is to motion the "Y" quickly across the formation to the side of the 1 tech and arc him to the OLB or FS. If the defensive secondry rolls up to the motion, you probably have the playaction slant and Speed Option away from motion for sure. 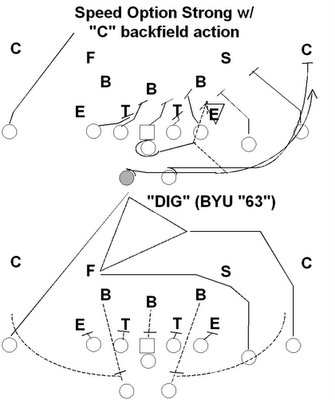 Speaking of runnng strong, the Speed Option to the strong side looks to be a solid play - especially if you have repped the "C" backfield action to perfection. This action will serve to freeze the LBs and safeties for a moment - setting them up for the crack blocks of "Y" and "Z."

Getting back to the passing game, the 4 across look by the secondary might aid the safeties getting to the pitch, but it should serve to hinder pass drops - especially if they like to run a cover 2. For this reason, I've decided to try the old BYU "63" "middle flood" route. Like Chow says, you get that "oblique stretch" by the receivers - right in the middle of a secondary aligned to help stop the option. You also get 2 backs in blocking to better protect your five step drop.
I like this route and especially play action in this situation. 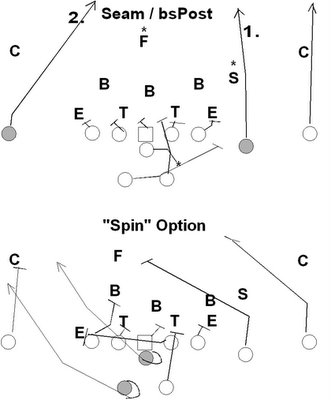 Speaking of play action, I've seen the "Y" come wide-open against this coverage at the SS runs up to make a big stick on the option. I've also seen the backside Post (or Split route) come open against safeties that tend to come flat as they rotate to their third. I've got this drawn up where the QB is reading the SS then switching backside if the SS drops. the backside route needs to be ready to turn the Post into a Dig if it looks like he can't get behind the FS. It will probably be so obvious from the box which route is open that you may want to just tag it when you send the play in.

The last play I thought might be worth a look is our take on the "Crazy Option." We trap or log the DE instead of pitching off of him, so I've gone to calling our play the Spin Option in order to highlight the differences between the two plays. Anyway, I like misdirection versus the secondary rotation and this is about the only other misdirection play I can think of other than running the counter-trey. I really like running that to a TE, so it's out as long as I stay in 3 wides. You could run it, though.

There's a lot more that you can run against this, and I'm eager to see that your suggestions will be.

ps. I'd like to send out a big "Hello" the latest two members to Veersite who have signed up on Frapper (Friend Mapper), Coach Nicholson and Coach Kennedy. And I've hopefully fixed the problem registering for the message board - I see new posts beginning to spring up again.