I have added some new play diagrams...

Coach Smith
Posted by Steve at Monday, October 25, 2004 No comments:

Every so often we run into a 4-front defense and we get a shaded 3 technique to our TE side. This makes it tough to run our ISV. We could double the 3 tech and hope the psT can release to the MLB in time, OR.... we can run our Midline. 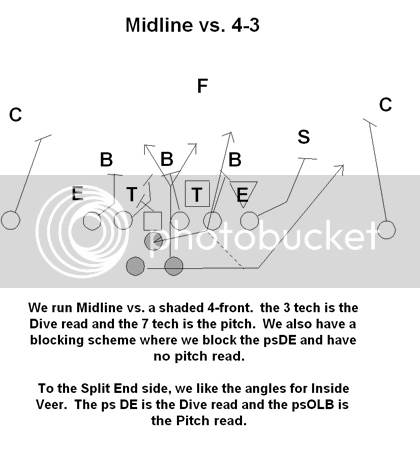 The diagram above is roughly how we run our midline. We try to make it as similar to ISV as possible so we don't have to re-teach so much. the QB's steps are different; he steps back behind the C and points the ball at the dive read... the psHB steps in at a 45 degree andle and aims just outside the foot of the Center. Everything else is pretty much the same... the psG doesn't have anyone to block on the line, so he inside releases second level... the psT has the psOLB... the TE arcs to force... you can fold or scoop the 1 tech. The Midline is probably better when ran from a set with a true FB... just like the OSV is better when ran from splitbacks. We've found that it serves it's purpose from splitbacks... pulling that 3 tech back in and then we can block him better and run ISV.

Coach Smith
Posted by Steve at Monday, October 25, 2004 No comments:

hey, before I get alternately quized and/or lambasted over the last two sets of play diagrams, let me clear up something. I just noticed the path I had drawn for the psG on each set of plays (speed option from the gun and OSV vs a 52). I started off with the double between psG and C (thinking a shaded nose) but drew it with a head up NG. In this case, I should have had the ps guard head straight for the psLB's outside shoulder withthe intentions of intercepting the offside LB at that spot... and picking up the psLB should he decide to try and blow thru A gap. the diagrams show both the double AND the scoop... which is kind of overkill... and leaves A gap playside a little shaky.

I gotta quit writing this stuff when I'm tired... before you know it I'll be trying to run ISV with the double wing 6 inch splits... Whew!

See you guys next week!

ps. I went back and corrected the psG path on the last two play diagrams. I left his combo path but changed it to a dotted line.
Posted by Steve at Thursday, October 07, 2004 No comments:

Option from the Gun

alternate title: How to be a He-Man Run-Over-Em Coach while Pretending to "Air it Out." 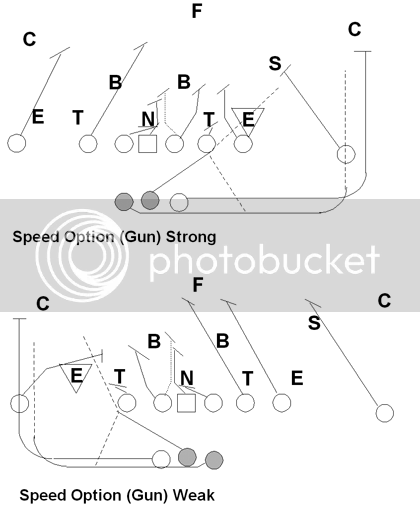 Remember the term "sensitive guy?" I sure do. My friends and myself make a lot of jokes about it... until we found out that the girls just weren't going out with you unless you were indeed "sensitive." (Remember, this was high school) So we did like many red-blooded American males of the day did. We swallowed our pride and faked it with the best of 'em. I got real "sensitive" in a hurry!

Fast-forward to present day. You're running all over every opponent but then IT happens. You know what I'm talking about. Every running team and every option Coach goes through it at some point. Suddenly, the "Fans" think you're not "throwing it enough." (BTW, by "fans," I'm talking about those in the stands who watch way too much SportsCenter, don't know the difference between a pro vs. college vs. high school athlete... who don't know horsesh*t from good applebutter... you get the picture.)

I don't know what they're thinking. Why not ask us to forgo the usual Khaki shorts and staff shirts and take the field in pink tu-tu's and high heels? It would be simpler, that's for sure... possibly kinder as well But here you are suddenly feeling the heat for not being "progressive" enough, "mod" enough, "smart" enough to join the "moo-ing herd" and go to 1-back shotgun and (say it together, folks) "Air - It - Out!" So what's a coach to do? Should you actually forgo common sense and throw out your offense for the run and shoot? Heck no! I'll tell ya what you do, you pull a page outta Steve's old high school dating playbook and "fake it." Yep, when all is said and done everybody's happy and no one's the wiser. Sounds like a win-win to me!

So how do you "fake" throwing the ball, you ask? Here's what ya do... take a base set like your "Pro Right" (or whatever you call it) and tag it "Gun." (BTW, this might be a good time to see if your center can actually execute a decent shotgun snap. ...enough coaching points... I'll get on to the good stuff!)

Now I'm not advocating you do the unthinkable and actually "throw" the ball downfield... I'm just giving Joe Sixpack the proverbial "shiny object" with which he will become mollified and enter that fugue-state where he's much quieter and easier to tolerate. (okay, okay... I'll give ya the definition- fugue state: A pathological amnesiac condition during which one is apparently conscious of one's actions but has no recollection of them after returning to a normal state. This condition, usually resulting from severe mental stress, may persist for as long as several months.)

Now here's the good part- you run speed option at 'em from the Gun. One bonus is that the new angle taken by the QB to the DE keeps him (the DE) from "feathering" and really makes him decide in a hurry who he's gonna take. I've seen a "dead" speed option come back to life from the gun for no other reason than the steep downhill angle of the QB.

Now here's the REALLY good part. After the game when you're giving the paper a quote or two, work into the mix the following statement; "Well, we were really hoping to air it out tonight when we got in the gun, but the defense, well, the defense just kept jumping into a 'nickel and dime' package (!) forcing us to check-off to the option. We really wanted to throw it deep, but when the defense is just giving you the red carpet to the goal line, you just have to take it!"

So there you go... you are off the hook so to speak. You really, really, really wanted to sling it all over the field, but that darned ol' defense was so scared of your (obviously) superior game plan, they took the pass away from you and you had to limp along with those old 6, 7 and 15 yard ground gainers. SIGH... Oh, well, we'll get 'em next time!

You can actually get in the gun ever so often and throw your 3 step game out of it... set up some draws and screens out of it without too much trouble... and all the while using it primarily for speed option. The real laff-riot will be the inevitable comments about how Ol' Coach has really "opened it up..." "gotten with the program," etc.

Have fun with it, 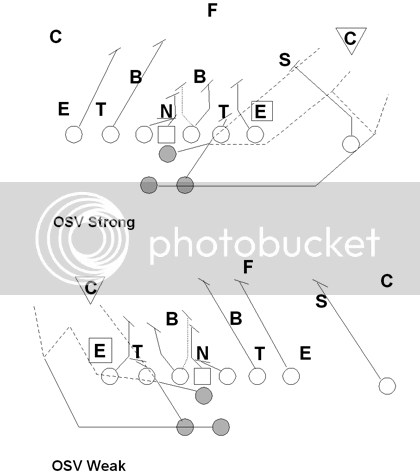 Here are some things which might help when confronted with a 52 defense.

Try the 2 TE set first and see what they do. One thing I've noticed, a lot of DC's hate a balanced front... they want to shade thier guys this way and that way and need that 'ol tight end most times to get that strength call. All this makes me want to give a dose of two tights and see if they'll balance up for you. If they inisist on treating one side as the strength (to the field, for example) you will just have to "insist" on running weak and having a numbers advantage. It can end up being just that simple. Having two tights makes it so much easier for me as well because it makes the defense easier to read... you can tell what they are trying to do to you. I also like no tight end sets for similar reasons. Put a big defensive end out on an island (Yes, like Gilligan, Coach R!) and watch how unconfortable a lot of 'em get playing out in space. This also allows you to make some easy reads as a playcaller as well... Hmmmmmmmm... eight in the box... better run the bubble screen to the twins... now the hitch to the SE... LB's walking out into the hook-to-flat zone? Now they've loosened up for ISV, Midline, and inside trap. Who sez ya gotta be an offensive genius to move the football? Me, like the song sez, I "Dare to be Stupid."

The OSV begins with the double team playside between the TE and psT. When in doubt, Double! The perfect block for me harkens back to my Wyatt Double Wing days: Get the DT on roller skates and run his a$$ back into the ILB. This ends the discussion right there. If the TE "sees" nothing but the psT's back, then he releases upfield (but not inside!) to cut off the ILB. Next consideration is the noseguard. If he's shaded to the play, we double and hope the psG can release for offside ILB... no big deal if he can't- it just looks better that way on paper. If your C can handle the NG, then sned the psG on a good angle for the offside ILB and scoop the noseguard with the C and offside G. This will give whoever gets the ball on heck of an escort towards the goal line. Offside T and TE inside release to second and third levels with good cut-off angles. BTW, WE NEVER LET A MAN CROSS OUR FACE UNBLOCKED (or at least we're not supposed to!)

Backfield coaching points. PsHB is aiming at inside foot of psT and is trying to "beat" the QB to the hole. You must hit it fast or a good DE will play the dive and keep and mess up the play. You gotta make him choose. Failure to do this will cause hats to fly, clipboards to break, and neccessitate (sp?) expensive repairs to headsets. Trust me on this one.

The QB steps out and up into the LOS and points the ball right at the read. If the DE takes dive, he may have to step around the collision, but preach against "jumping the hump." Keep him straight towards the veer lane. The pitch back keeps his pitch relationship on the way to the CB. 99% of the time, I give the flanker a "crack" call to have him block next DB inside. I think this gives him better timing for the play and helps block for the HB if you're getting a lot of "give" reads. This also makes the CB the pitch read to either side if you're into that symmetry thing.

Hope this helps your execution of the outside veer... arguably the best play in football! (or at least in the top 100)

Coach Smith
Posted by Steve at Thursday, October 07, 2004 No comments: