Well, I'm going to sum up our Spring Practice in a Hunter S. Thompson gonzo stream-of-consciousness fashion. Mainly because I'm ADHD as a mug... and I don't have a lot of time today.

When the only returning starters returning to your offense are your center and two guards, you're going to have a lot of mistakes, do a lot of coaching, and answer questions you haven't answered in a long time. Sometimes a very long time.

Confucius say "never spit in man's face... unless man's mustache is on fire." Confucius also say, "Coach with slow Option Quarterback will be bald by Fall." When you pull the ball, ATTACK the damned pitch read! Midline Triple might have to be my new best friend...

Stalk blocking is not something great athletes are born with. They have to have it drilled in to them over time. Lot's of reps coming for our SE's this Fall...

We scrimmaged a state championship private school to the tune of a 3-0 loss. The defense bent but didn't break. We moved the ball in spurts - always seemed to have 7 or 8 guys doing exactly what they were supposed to do and the rest... well, the rest weren't. At least those few were facing the proper direction when the ball was snapped. Whew!

Our Frosh QB with the arm was introduced to varsity football when he did as he was supposed to on a Sprintout when he tucked it and ran for a 1st down... the only part he didn't look good doing was that "dodging" part at the end - you know, the part where the Free Safety almost breaks him in half except for that last-second wiggle by the QB. Dodge, Tuffy, dodge!! Doh!
As Tuffy lay there contemplating his navel after getting beheaded, the trainer asked him if his ribs hurt... he replied with the affirmative. When asked if his chest hurt, he also replied with the affirmative. I asked him if he could "narrow it down a wee bit..." Tuffy replied, "Coach, it All hurts..." A minute later, the only thing hurting was Tuffy's pride...

Tuffy returned the next series and damned if he didn't play better. Well, they do say a near-death experience will change your life...

Our FB kept cheating back to 5 yards... a far cry from 3.5 to 4. No wonder the veer looks slow. He let the ball rattle around a little during his runs, but after a good ass-chewing, he started two-armed it every time and is moving the pile 3-5 yards. Hmmm... I may have to piss him off before every game.

Our 2nd string QB is too slow on the option, but does okay at WB... blocks well on Belly and Belly-O... on Rocket Toss... runs tough on Counter during inside drill at practice. And he knows the plays. I think he's found a home at WB.

All the offense is in except for Counter Option and Barnyards. A lot of guys are shaky about what they do on certain plays, but we're getting there.

I've wanted to run DeMeo's 3 Step Boot for years, but for one reason or another never really have been able to do so. This Spring, we were looking for simple but effective plays we could run that fit well with our established playlist and decided to give the 3 Step Boot a look.

Since we run the naked bootleg pass off our Rocket Toss, most of the skill players know exactly what we're trying to accomplish with the play. With the 3 Step Boot, we have the opportunity to utilize one of our two 6-foot-plus Split Ends as the primary receiver and still have an "out" for the QB should the defense take the route away. 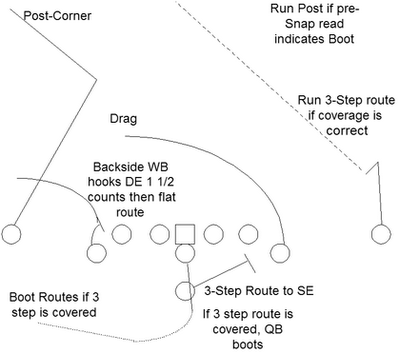 Blocking - if we're running it as the diagram shows, the O-Line is stepping left and the FB is picking up the EMOL to the right. The left tackle doesn't need to be able to hook the DE (4 front) because he has help (for a 2 count) from the left WB before he releases to to the Flat. If it's a 50, then the WB and Tk are one on one and it becomes more difficult... however, I doubt you'll see the DE and DT come hell-for-leather up the field on 1st-and-10 so you should be able to hold a block long enough for the QB to boot - if that's what his read is.


Our right handed QB runs this 75% of the time with the Read Receiver on the right and the boot phase on the left. Reverse this for our Lefty QB. When the backs and receivers come together in practice, we have 2 QB's side by side and all the backs and SE's in the base alignment. The QB closest to the read throws the 3 step route called. The 2nd QB pumps then twirls to the boot phase and throws to a predetermined route. 2 coaches (or a player and a coach) will throw the remaining routes. We'll run this 3 times before swapping the QBs... the boot QB hits all 3 boot routes and the read QB will usually throw a Stop, a Fade, and a Slant or Out. Then we swap it out and repeat. Then we will go the opposite direction. We do our Play Action Pass in a similar manner... 2 QBs close together with each throwing a predetermined route and a coach/player behind throwing the third. We'll run a bout 3-5 each direction with each QB throwing each route at least once. We can get a lot of reps in a 10-15 minute period.

Let's take a look at the Hitch by the primary receiver.

Versus cover 4/2 -- QB reads the CB over the SE. If he backpedals during your drop, then throw the Stop. If he hangs to bump or funnel, then proceed to the boot phase.

Versus cover 3 -- QB reads the playside OLB if the DB is 7 or more yards off the read receiver. If the OLB drops into the throwing lane, continue to boot phase. Our read on the boot phase is to try to locate the Crossing route 1st, then check from Post Corner to Flat. If you get heat, get it to the Flat or OOB. If you boot and no one is open, remember that you are a running QB - tuck that football and go!


If your read route is a deep pattern (Go or Fade), then use the reverse thought process. If we call a deep route and the D lines up in a Cover 3, we will automatically know we're going to the boot phase.

Note: The diagram has the left WB blocking 1 & 1/2 counts before releasing to the Flat... we are using a 2 count. My point (such as it is) is that there's no real difference between the two - especially when a hyped-up teenager is doing the counting!

The main problem we have to date is the QB's wanting to boot no matter what... I guess they are so used to having success with the naked boot off Rocket they just like running boots. We ran this 4 times in our scrimmage and completed the Stop, the Post corner, the Flat, and the Flat (could have thrown the Stop but didn't.) Our shortest gain was 7 yards. Not a bad 1st down passing play for a running team, eh?

Coach Smith
7/11/09 Update
We've ran this in Passing League and have yet to be dissappointed. It might end up being a go-to play for us this season.
Posted by Steve at Thursday, May 21, 2009 No comments:

I got an email this week from an option coach up in Michigan concerning running Midline from splitbacks... Below is the diagram I shared with him... 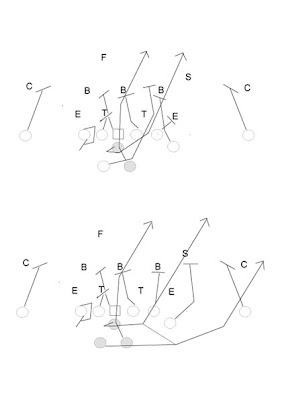 The top is the double version and the bottom is the triple version. Note that we aligned our HB's similar to the way Carson-Newman does - splitting the inside leg of the guards with their heels at 4 yards from the back tip of the football. Those that align their HB's deeper and/or wider may not have the same results as we do, i.e. play hits slower, too wide, etc.

Here's a link to a previous Midline article...also from Splitbacks:

Increased numbers equals more players (of course) and the ability to two-platoon. However, more players also equals a net decrease in overall football knowledge... and more "incidents" like the ones listed below...

"Kid, go run around the Blaster..." - Coach 2
Kid runs to blaster... then proceeds to run thru blaster -without pads- until Coach 2 notices a few minutes later and rushes over to stop him.


There have been a lot more than this since the beginning of Spring practice... wish we had them on film... the revenue from such a blooper reel could let us all retire early!
Posted by Steve at Wednesday, May 13, 2009 No comments:

In Support of Lead Option

Last installment, I extolled the virtue of the base dive versus the shaded 44 stack defense. The problem we were having was dealing with the stacked backer over the 3 tech on ISV. Since we were double teaming the 3 tech, the shade was able to scrape hard and hit our FB in the mouth on the dive. We've decided that rather than try and check off on the LOS with our green QBs, we would just base it on the line and let the FB hit A gap... and it has worked pretty good for us so far.

However, running right up the gut every time you encounter a 3 tech didn't seem to be the complete answer either.

Then we remembered that old veer standby, the Lead (double) Option. 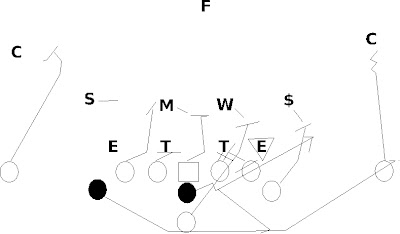 No matter if you have a 3 tech or not, you still have the psILB accounted for with the FB. But that's not the best thing about running the ISV Lead Option vs. the 44. Remember the 5 tech you've been using as the read for the dive? Well, unless you call time out and tell the Defensive Ends the deal, they're still going to be playing the FB. What we've seen from this play, the 5 techs crash in, giving the QB a quick - but managable- pitch read. And let me tell you - man, does the 5 tech give the QB a pitch key!

We let the FB take care of the fake on the dive and it seems to work. We usually have a 3 tech, a 5, and 2 ILBs trying to tackle the FB. The best part is when the interior defensive players all look up and see the Wingback sprinting into the secondary.

After running this a few days, something else has become evident. While the Load Block has been outlawed in all states but Texas... and the Load Option has pretty much faded away because of this, you might get a 5 technique so fixated on tackling your FB that you get, in effect, the Load Option while running Lead Option. We had this happen about a third of the time we called Lead Option. The 5 tech crashed so hard the FB never made it to the LOS... the QB pitched right behind the collision and the pitch back was off the the races. The ILBs were also compressing down on the dive and were out of the picture as well.

So why run Lead Option instead of Rocket Toss? Well, I really like Rocket Toss so I'd say you'd better keep running it! But if everybody - and I mean everybody - is compressing down on your dive on ISV, the the Lead Option can get the ball out on the edge almost as fast as Rocket... with the added benefit that inside out pursuit will be slowed as well. (And don't forget Midline Triple or Freeze Option as other means of getting the ball on the perimeter while as the same time getting the defense to compress down instead of fast-flowing to the ball.)
Posted by Steve at Friday, May 08, 2009 1 comment: